Themed ‘Art of the Impossible’, Encore was briefed to provide advanced AV for the duration of the four day event, which attracts the countries best technology engineers and IT gurus to learn about the latest and greatest software and hardware coming to Microsoft. With this audience of New Zealand’s brightest minds in attendance, it was immensely important that the Encore technicians executed the event flawlessly. 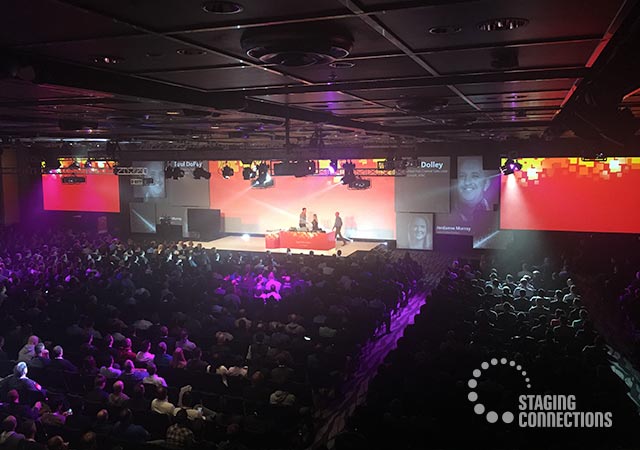 A custom designed set was developed for the key note sessions, comprising two extra-large 16ft screens on the outside, five small square screens leading to the middle of the room and a single, large, seamless screen in the middle – celebrating the ‘Art of the Impossible’ through different technologies and unusual screen placements.

Encore collaborated closely with Make all Media, ETS and Big Picture, to guarantee a high tech digital conference worthy of the country’s best and brightest in technology.

The team provided a smooth live stream between SKYCITY Convention Centre and SKYCITY Theatre, allowing all delegates an unobstructed view of the important Key Note sessions. To ensure continuous interaction and real-time movement across the two locations, the Encore team provided:

Encore produced a seamless and successful four day conference that exceeded the high expectations demanded of it by its technologically-savvy audience.

The client was impressed by the Encore team’s professionalism, state-of-the-art equipment, and high level of knowledge and service; faultlessly delivering on all AV aspects of the event, to result in a successful conference.

“Having worked with Encore (previously Staging Connections) as our AV suppliers for Microsoft Ignite 2016, I can recommend them as competent providers of configured audio visual equipment… and their availability for rehearsals pre-event across SKYCITY and Crowne Plaza for our 2,500-person event during October 25-28 and in the seven month lead up to the event. We were satisfied with the service and communications we received during our eight-month engagement as well as on-site during the event.” Kylie Williams, Senior Audience Evangelism Manager, Microsoft New Zealand