Yellow buildings have been spotted in Tasmania! If you happened to be driving at night around some of Tasmania’s major cities you may have noticed some prominent buildings glowing a brilliant yellow. This stunt was all in the name of raising awareness for road safety in Tasmania – a campaign we were thrilled to play part in.

National Road Safety Week ran from May 3 – 8 this year, with the aim of increasing awareness about the need for all road users to be safe and courteous on the roads. Last year, 36 people died in road crashes in Tasmania and 260 were injured. The road safety week was filled with activities thanks to the joint effort of the Road Safety Advisory Council, Tasmania Police, the RACT and Southern Cross Television.

Our Area Manager for Tasmania, said they were excited to be part of the campaign and to do what they can to shine a light on road safety.

“We lit up several key buildings across Devenport, Hobart, Launceston, and Burnie. We used 9 x 500watt HUI Cyclonic’s with a yellow gel cover as well as LED flood lights situated in strategic positions to cast an elegant wash over the buildings,” he says.

One of the buildings was Launceston Town Hall which became a beacon for the city. 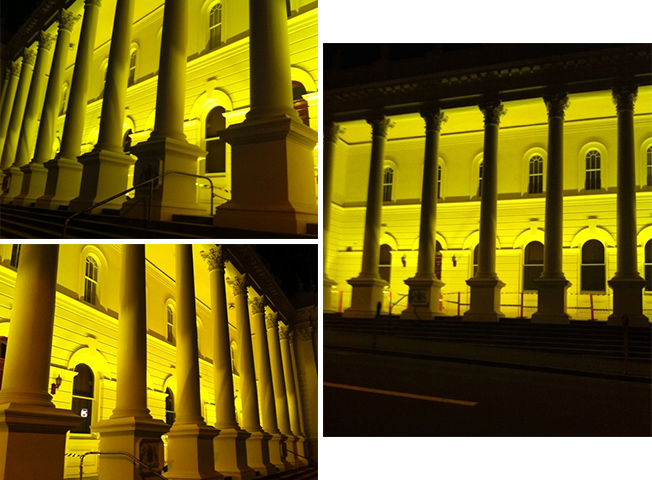