We partner with Mirvac for an Australian first lighting installation

With the true meaning of Christmas at the core of the project, Mirvac aimed to bring joy to each of the +1.3 million pre-Christmas shoppers who enter the centre during the month of December.

The show involved a series of six different Christmas themed experiences, including Joy, Love, Giving, Sharing, Hope and Peace. The performances were scheduled to commence every half-hour, rotating through each of the six routines which lasted between 3 to 5 minutes each. The free show wowed shoppers with views of love hearts and Christmas trees that formed from the light spheres. 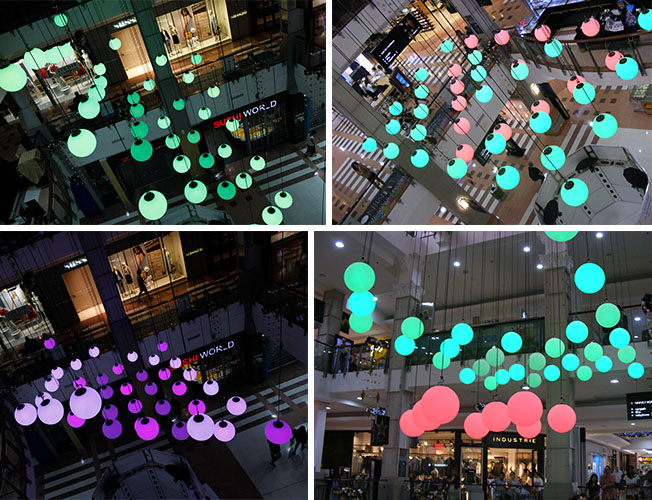 To maximise visibility of the installation by shoppers, the sphere lights were suspended above the shopping centre’s central void, at the entrance, by a 6m x 5m grid of truss which supported the 39 individual 350mm LED lights, each attached to 9m winches which allowed isolated control of speed and direction.

The elite software required to manipulate the individual lights was not previously available in Australia and had to be sourced internationally. This cutting-edge technology was utilised to produce the complex patterns and shapes that were core to the show.

The GrandMA was the primary control system along with a 3D Media Server managing the spheres in the 3D space. The spheres were mapped in virtual 3D space within the 3D Media server, which also generated programmable movement patterns which could be recalled via Artnet DMX from the GrandMA. The movement of each sphere was converted from “Movement in Metres” to DMX values and sent back to the GrandMA, where it was then merged with the colours being triggered from the GrandMA.

Using the Agenda item on the GrandMA we were able to trigger the 3D Media server to playback the audio track. Each audio track was converted to Mono on the Left channel and striped with Linear Time Code (LTC) on the Right track. When the GrandMA received the time-code it would execute all cues from that point on.

The scheduler ran each show every 30 minutes from 1000-2100 for 29 days. The team also had the ability to ‘remote in’ to trigger shows manually, adjust the volume or change the schedule. In addition, there was a sub system that would send an email if there was something wrong with the system, alerting the team to run a system check.

Iconic Christmas tunes played from two dedicated PA systems anchored on level 1 and 2 at either side of the void, creating a multi-sensory experience to capture the magic of the Christmas spirit for shoppers.

Mirvac encouraged shoppers to share their experiences of Luminous via social media which resulted in numerous videos and images being shared on Instagram, providing the client with positive online exposure and personal recommendations from shoppers sending their friends and family to the centre to witness the production.