What epitomises an Australian summer more than attending an outdoor event?

Apart from the weather, have you ever considered the other numerous challenges that face event producers when delivering high quality event experiences in outdoor locations? Things like:

1. Making sure the public attending feel part of a community or brand experience.

2. Keeping safety as paramount at all times.

3. And most importantly, creating an interactive experience for those attending and those watching at home.

Whether executing an audio visual solution for over 750,000 spectators in South Australia or providing staging for a parade which attracts close to 400,000 people we have combined creative and technical elements to deliver a recent slew of outdoor events under challenging outdoor conditions.

The Santos Tour Down Under, the southern hemisphere’s largest cycling race, held annually in South Australia is a prestigious road cycling competition drawing cycling greats from around the world. By working together with the team over numerous years, we have been able to determine the optimal location of speakers and screens at multiple sites throughout the week long festival of cycling.

Over four hundred 100 volt Line Speakers were spread throughout the streets of Adelaide, its suburbs and country towns with over 30 km of copper cable for the street PA’s used. 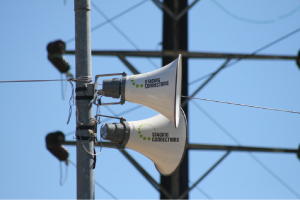 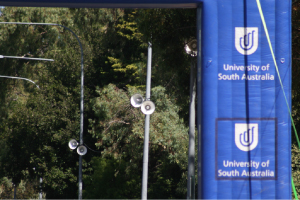 In order to ensure the outmost safety for both the riders and the public, a bespoke audio system was installed into some of the race day cars which travel ahead of the parade. 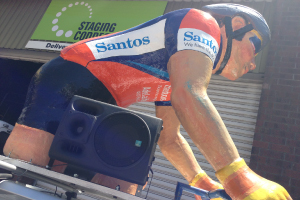 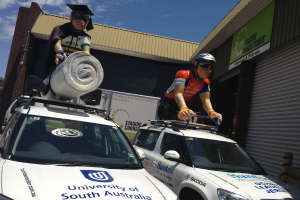 All of this combined allowing for all attendees to be enthralled with the unfolding action whilst ensuring the riders were not distracted from the task at hand.

Toward the beginning of Summer, we also assisted with the Credit Union Christmas Pageant in Now in its 80th year, the parade attracts over 400,000 people each year and many more for the TV audience. Our team of 12 staged the event with over 200 speakers along a 6km route through the city streets and over 60 individual MP3 audio systems in various floats and walking characters.

We worked closely with the Pageant, even disguising two crew members as Clowns so they could ride in the pageant and fix any audio issues on the floats without taking away from the magic of the parade from either the live or TV audience. 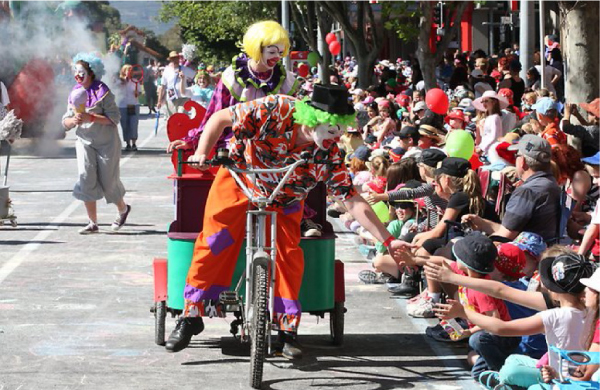 Although outdoor events present numerous challenges compared to Indoor ones, we find that our crew love taking on that challenge and working in the great Australian sun. Being able to contribute to a major outdoor event in a way which enhances the public’s enjoyment (whilst remaining relatively in the background) is part of the thrill the crew enjoy. With temperatures reaching 40+ and usually non-stop sunshine, we have developed logistics and plans to suit to all weather contingencies and ensure that not only our staff & general public remains safe but that the show goes on and all deadlines are met.