Looking back at this year’s Spring Racing Carnival launch event

Whenever there’s a big, high profile and technically demanding event you can bet on one thing – Encore is behind it. One of the biggest events on the Australian sporting calendar is the launch of the Spring Racing Carnival, which coincides with the Australian Racehorse of the Year Awards.  This year the two-fold event was hosted at the Melbourne Cricket Ground (MCG) and was attended by the racing industry’s elite.

We were engaged by Racing Victoria, a valued client for over 10 years, to deliver the event from brief to execution including all audio, vision, lighting, stage set and styling.  As the event was to be broadcast the following evening on Channel 78 and streamed via Racing.com, it was imperative the event environment was technically flawless and tailored for this purpose.

The Launch of the Spring Racing Carnival is a media event that highlights the start of the Carnival and the upcoming feature races – Caulfield Cup, The Cox Plate, The Melbourne Cup, The Oaks and Stakes Day along with the regional cups.

This year the Launch took place on the MCG arena with racing legends being the feature – horses, jockeys and trainers paraded in front of the assembled guests and a huge contingent of media. Renowned Australian sports broadcaster, Hamish McLachlan, MC’d the Launch parade and interviewed the racing legends. 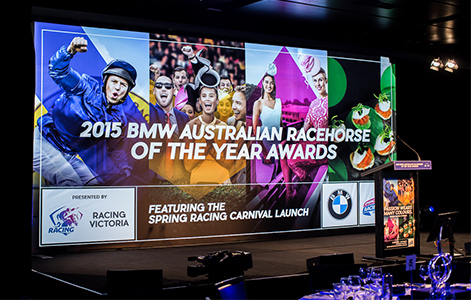 After the official launch concluded in the MCG Arena, guests were moved from the Grandstand into the Members Dining Room for the presentations for the 2015 BMW Australian Racehorse of the Year Awards.

The styling and design teams collaborated with the AV technicians to create an elegant room look that supported the presentation purpose. The awards stage was centred at the front of the room, and housed an impressive 3 x 6m Event Backdrop (pictured above), flanked with large 16:9 screens that projected the award ceremony to the 200 guests. The Event Backdrop was custom designed by Racing Victoria with a collage of images that reflected the invitation to the event and the marketing campaign for the 2015 Carnival. 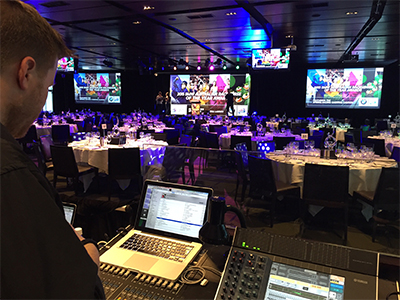 Across the room we installed 2 projector screens and a high-quality audio system to compliment the many fixed televisions to ensure all guests had perfect line of sight of the presentations and could clearly hear the announcements. Guests were sat round banquet style with sophisticated centrepieces comprised of a large martini glass with mirror balls that were up lit using an internal light box.

The end result was a first-class launch event, fitting for the prestigious occasion.

What did the client say?

An amazing team effort pulling off last night’s SRC launch and AROY awards. Thank you so much for your time and effort. Everyone contributed to something that was very special and you should be very proud of what was achieved.

We are very lucky to have a team that has passion, creativity and commitment to deliver an outstanding event for Australian Racing. A big thank you – no better way to launch the spring racing carnival – the greatest show on turf.