On 23 May, NUSHIP Hobart 39 was launched from Techport Australia, Port Adelaide and Encore were there to help see her off in spectacular style. The Hobart is Australia’s first next generation Air Warfare Destroyer and an important milestone for the Royal Australian Navy as well as for her builder, the AWD Alliance.

Our team was responsible for bringing the private event to the world media and public. The event generated a vast amount of media attention with the Commonwealth Defence Minister and a large number of senior naval personnel in attendance, as well as the South Australian Premier and other senior ministers. The Ship’s sponsor, Mrs Nicola Hodgman (wife of Tasmania’s Premier, Will Hodgman) officially named the Hobart and christened the ship with a bottle of local Bird In Hand Sparkling Pinot Noir.

Together with local event manager, Big Fish Events, our team managed all production and AV for the VIPs, guests and those watching via webcast. It was a large and challenging environment as the location was outdoors on an active construction site located within a secure defence facility. Therefore, safety and security was paramount. Encore and Big Fish Events worked closely with multiple teams within the AWD Alliance to ensure that all stakeholders’ requirements were met and that a memorable and fitting occasion was held.

The team delivered an audio system distributed for multiple areas across the ship dock and worked with Big Fish Events to deliver the event logistics. Encore installed numerous large LED screens for live camera and video footage strategically positioned around the area. This ensured all attendees had optimum viewing of the ceremony. Due to the location of the event being held within an active shipyard and Defence facility, our team provided a webcast that combined the audio and vision of the proceedings which were then distributed live to the general public. The webcast enabled several key stakeholders located overseas and interstate to be involved with the launch. To capture all of the social posts surrounding the event, the team also arranged for Event Feed to be displayed live on screen – allowing well wishers to post their messages and engage with the event proceedings. 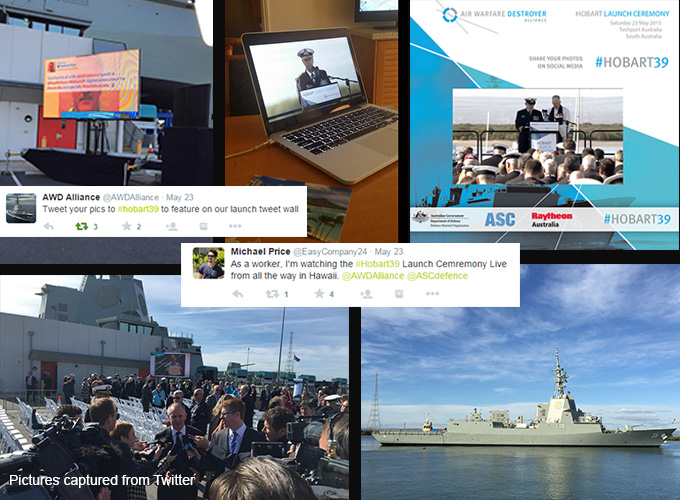 On the day, the webcast received over 3000 views from around the world and is still available for viewing from this link.  Event Feed received over 370 users and 720 posts which were displayed live on screen at the event.

Encore were thrilled to be involved in such a momentous event in Australia’s naval history and wish her crew safe voyages and missions in the future.

“Encore (formerly Staging Connections) was an integral part of making our Hobart Launch Ceremony a successful event. Not only did they provide the infrastructure and production capability that we required, but they also brought innovative solutions to our event – such as the Event Tweet tool and the live webcast feed. Having the Event Tweet tool as part of our event helped to increase our Twitter following and ensure that we were in the top 5 trending hashtags on the day of our event in Adelaide. Our live webcast received around 3,000 hits from around the world for a 90-minute event, with hundreds of people watching it in the subsequent days following the event. This global reach would not have been possible without our live webcast.”