How to create event lighting that communicates, inspires and delights

It goes without saying that lighting is a crucial element of most events.
Whether it’s on a grand scale, like the projections we see at Sydney’s Vivid
festival, or a smaller-scale event with lighting illuminations in a foyer, it’s an artful
practice – and when done well, can really take your event to the next level.

Light can immediately change the space it’s used in. An everyday location
can be transformed into an attention-grabbing canvas that helps deliver
your message. As a medium, light can be affordable and flexible enough to
use for all events. Lighting equipment can be as simple as battery
driven, wirelessly controlled fixtures that project the colour of your brand, or
as complex as the incredibly powerful computer-controlled projectors that
map video onto any conceivable surface, making it look 3D.

Lighting design starts with you

When we encounter something that surprises us, we’re instantly engaged – and we react. We might react by discussing what we saw with the nearest person, taking pictures to share on social media, and asking questions. Imagine what that can mean for your customers, staff, friends or family? Evoking such a reaction in an audience is a great emotional experience for your event. Colours, shapes, symbols, movement, images and video are all tools that can be used to help you do just that.

Effective lighting can be the simplest 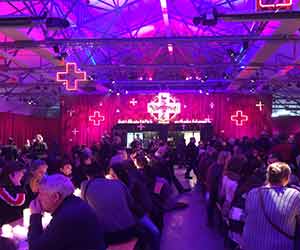 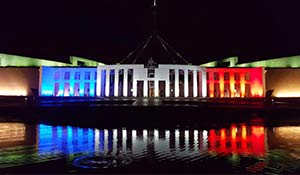 A technically simple lighting activation can be as straightforward as illuminating a space or building in a single or multiple colours. And it can still make an impact, or tell a story.

Our Tasmanian team has been involved in many indoor and outdoor activations of this kind, including lighting the exterior of government buildings yellow for Road Safety Awareness Week (pictured top left), and performance venues in red to reflect the theme and spirit of the Dark Mofo winter arts festival (pictured middle left). To pay our respect in the wake of the Paris Attacks, our Canberra team worked with the Australian Government to illuminate Australia’s Parliament House in red, white and blue, to reflect the French flag (pictured bottom left).

How do you illuminate buildings?

Using the Tasmanian Road Safety Awareness Week as an example of lighting buildings, we used nine high-powered 500watt HUI Cyclonic flood light with a yellow gel cover to illuminate Launceston Town Hall. Physically, they’re long rectangular bars, which sit on the ground and project up. These usually contain many light sources, such as dozens of high-powered LEDs.

Did you know…These specialised lighting fixtures for outdoor events or architectural lighting are weatherproofed, and are given an industry standard IP (International Protection) rating that defines the conditions they can safely operate in. An IP rating of IP65 is the most common for safe outdoor use, where the ‘6’ means the fixture is completely protected, and ‘5’ means it’s so well protected from water that water jets can be projected at it with no damage.

We can program outdoor building illuminations on an electrical timer
to turn on and off as needed, saving costs on technical staff as they don’t
need to be there. For ‘one-night-only’ events, a lot of the smaller fixtures
we use are battery powered and can be controlled wirelessly, meaning
we avoid time consuming and tricky cable runs. If illuminations are set to run over multiple dates, we’ll discuss a number of technical matters with
venue and lighting staff – and these include safe access to and provision
of adequate power, security for fixtures when there’s no staff present, and safe public access in and around the fixture’s location.

Putting your brand in the spotlight: Gobos

The next tool in a creative lighting designer’s kit is the Gobo. The name is
basically short for ‘Goes Between’ or ‘Goes Before Optics’, and it’s essentially
any object that is placed in a lighting fixture between the light source and its optical path to change the output you see in a projection. Gobos are great for communicating your brand or event message in an eye-catching way. Depending on their design they can also be used to help theme an event.

What you need to know about Gobos

How to use a Gobo for your event: Gobos go big for Adelaide Football Club 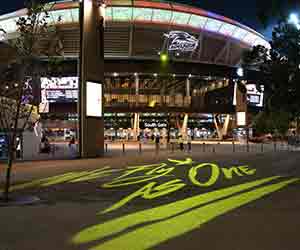 As the ultimate call-to-arms, we projected the Adelaide Crows’ logo and their
tagline ‘We Fly As One’, across iconic Adelaide buildings, the Adelaide Oval and it’s surrounding footpath and even trees. 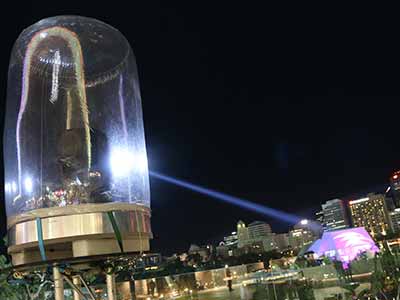 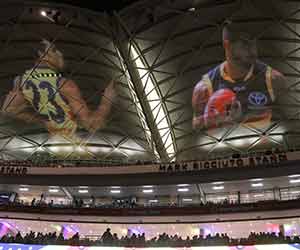 The iconic facade of the Adelaide
Festival Centre was transformed by a
giant Adelaide Crows logo, projected
from over 400-metres away by the
Clay Paky Mythos. We also had
permission from the neighbouring
InterContinental Hotel to use their
building as a projection site.

For the 2016 Toyota AFL Sir Doug Nicholls Indigenous Round in May, the Club wanted to celebrate by providing a unique and special pre-game segment using projections of current Indigenous players onto the roof of the Adelaide Oval grandstands. In what was a first for the Adelaide Football Club, the stadium lights were switched off before the game which allowed the player projections to shine whilst a Welcome to Country and other entertainment celebrated the Indigenous Round.

Using gobo lighting projection was the simplest and safest way to ensure a great outcome but also working in with the logistics on ground prior to an important AFL match. Each light was protected from the weather in inflatable domes on individual trolleys to ensure a speedy exit prior to kick off.

The full-colour images of the players projected onto the Oval’s grandstand
roofs were made possible by a newer Gobo manufacturing technique that
uses patented ‘thin film’ technology. This means any photographic image
can be transferred onto the glass, and any lighting fixture that can take
a custom Gobo and produce white light can project a full colour image. Until recently, this sort of full colour effect was only possible with video
projectors, which are more costly to deploy and operate.

Did you know…Outdoor activations of this scale and brightness require multiple control positions with lighting desks and operators, coordination with property owners, and custom creation of media, as well as the basic issues of security, weatherproofing, power and access. It’s not just a matter of pointing lights in the right direction and hoping for the best – specialist knowledge and consultation is especially important when using high-powered lighting fixtures outside. As an example of the level of detail and
planning that went into this project, the Crows activation used a ‘Bat Signal’- like logo projection onto the cityscape and into the air. To do this, we needed approval from CASA (Civil Aviation Safety Authority) to make sure that light wouldn’t affect any flights.

If you have a creative vision for your event that goes beyond colour and static image, your lighting activation will move into the intricate world of projection mapping. We’re all familiar with it, again thanks to Sydney’s Vivid and other international festivals, as well as countless viral videos and larger budget events.

Any kind of video can be created and projected onto any surface. It could be
as simple as a screen, or as complex as a moving vehicle. There are no limits to what is possible creatively with projection mapping. The only limits you have are time, budget, and practical considerations like rigging and power access.

We can provide full-service projection mapping – from creative consultation, to content creation, right through to delivery. We had the chance to show this off at the Amway Taiwan Leadership Gala Dinner in Sydney’s newest (and largest) event space, The Cutaway at Barangaroo Headland Park.

The Cutaway is named for the vast sandstone wall that flanks the enormous
underground space, standing over three stories tall. Amway chose the venue specifically because of this feature, and wanted to project video onto as much of  it as possible.

The Melbourne team embarked on a path to take members of the audience on a journey from the alien planet to our own, through digital mediums, projection, pyrotechnics, actors and lighting.
This event required the collaboration between the client’s 3D animation content with our 3D projection design, 3D mapping and reform. The design was precisely plotted in 3D software and 11 projectors were driven by 14 Watchout PCs onto a set space that canvassed a 22m-wide screen, full-size caravan model and floor space surrounding the area. Together with the 3D animated projection map and surround sound, time code generated cues for both stunt actors and pyrotechnics completed a theatrical experience.

Event lighting doesn’t always have to be fixed. Our Melbourne team developed a unique moving lighting installation for the 2015 Million Dollar Lunch fundraising event. It is one of the most star-studded charity events in the Australian calendar and each year the Children’s Cancer Foundation look to make it bigger and better.

To fit in with the overarching theme of kaleidoscope illuminated glowing spheres were flown off several trusses through the Palladium Ballroom and positioned in an arrangement near the entrance that boasted colour, vibrance and lent itself to the ideologies of a kaleidoscope. This piece was used to change the colour scheme and add drama to the event.
The glowing Yo-Yo LED balls moved on a vertical axis via motorised controllers programmed via our primary control system from our GrandMA desk to align the internal LED’s with a sequencing colour changing that created a kinetic chandelier piece unlike anything else. The movement of each LED sphere was converted from “Movement in Metres” to DMX values and sent back to the GrandMA which allowed for isolated control of speed and direction and where it was then merged with the colours being triggered from the GrandMA and aligned with the onscreen vision content.

Use creative lighting for your event

Any live event in any venue, indoor or
outdoor, can inspire, delight and inform
your audience through the well-thought
out and creative application of light.
Get in touch with us by calling 1800 209 099 or by sending an event enquiry to explore how we can take your event further with spectacular lighting and projection that
works with your budget and message.
The possibilities are illuminating.