Holographics: How to create mind-bending 3D illusions at your event

If you saw Australia’s own Dami Im perform at the 2017 Eurovision Song Contest, or Lady Gaga duet with the late David Bowie at the Grammys, you’ve seen the amazing potential of this technology to astonish audiences. The technique includes a Holographic Mesh Screen – an invisible, metallic coated screen that when hung on your stage becomes a vehicle for 3D content to appear in thin air. It is unique because it doesn’t require any special rigging or reflective floor space to project onto, and can be used in most venues.

The Holographic Mesh Screen works by fooling your brain into thinking there’s a three dimensional object hanging in the air in front of you. A high-powered projector is used to beam custom-made video footage onto the screen, using perspective and a black background to simulate three dimensions. Most importantly, the stage, objects, or people behind it are lit without that light touching the screen, giving an illusion of depth.

When your brain tries to reconcile what is really a 2D projection and the depth behind it as information it can make sense of, it decides it’s a three-dimensional object. Some people call this effect a ‘hologram’, but technically it’s the latest technological innovation of an illusion called ‘Pepper’s Ghost’ whose origins go all the way back to Victorian times.

Encore have been deploying our massive Holographic Mesh Screen to spectacular effect on gala dinners, awards nights, and product launches. For the Australian Hotels Association NSW Awards, attendees were initially intrigued by what looked like a bare stage bounded by black drapes, before the lights went down and the screen came to life with an enormous 3D digital set that interacted with dancers both in front and behind it, ingeniously tracked with motion sensors. Even awards presenter Shane Jacobsen got to have fun with the interactive elements before handing out the gongs. 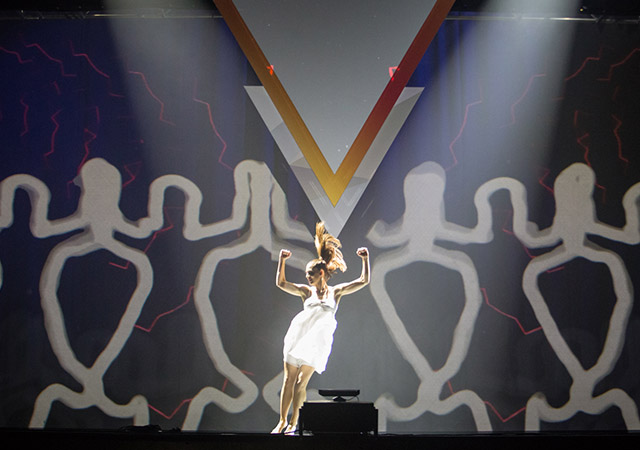 For legendary Chinese spirit-maker Moutai, known as ‘the world’s most mysterious spirit’, Encore Event Technologies enhanced the mystery to celebrate 46 years of the 2,000 year-old tipple in Australia. Giant three-dimensional bottles hung in the air, and custom-made video content showcased the brand’s history, highlighting the cultural significance of the occasion to over 500 distinguished guests.

The Holographic Mesh Curtain provides an ideal effect for any event that needs a big ‘wow’ factor. It’s perfect for product launches, and can used to entertain at gala dinners, award nights, in any venue with controllable lighting and some depth on stage. Ask your Encore Event Manager about the potential of using the amazing Holographic Mesh Screen for your next event, and put your imagination to work! Get in touch by calling 1800 209 099 or sending an online enquiry today.