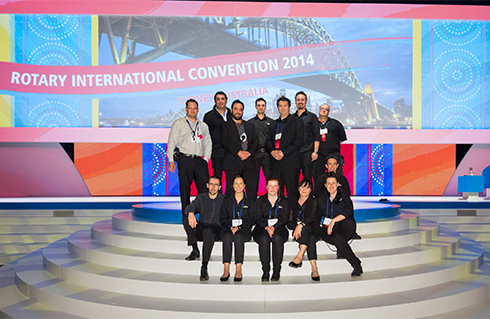 International Stage Managers Day (Saturday 10th October, 2015) was created in 2012 by the Stage Management Association in the United Kingdom, and what began as dedicated hashtag (#StageMgrs15) on social media, has quickly evolved into a global day to celebrate those who work behind the scenes.
With all sorts of performances requiring creative stage management, the day recognises those talented men and women in black, who you’ll find behind the scenes with their headsets on. They’re renowned for finding creative solutions to problems and without them, the show would literally not go on!

This year we are celebrating one of our longest serving Stage Managers, Fiona Robinson, who kicked off her career over 15 years ago as an assistant to the Account Managers, before progressing through to Project Manager and then Stage Manager. Her passion for creating special experiences that go off without a hitch has ensured her success, working on some of the largest events Staging Connections has produced like Rotary, the IUCN World Parks Congress and special events like the Humpty Dumpty Foundation’s Great Humpty Ball which brings together some of Australia’s biggest celebrities.

Fiona shares her thoughts on her career, the industry and how to get ahead.

Q: How did you get into the world of events?

A: Before I joined Staging Connections I worked at the Hordern Pavilion back when it was owned by the Royal Agricultural Society, so my background was in events but in a predominantly Rock n Roll Venue. Fifteen years on, I’m still loving being a part of the event world!

Q: What event would you LOVE to work on?

A: EUROVISION would be my ultimate event.

Q: There’s always ups and downs, what have been some of the highest highs for you?

A: Working on really big events like Rotary, or the IUCN World Parks Congress, the Humpty Dumpty Foundation’s Great Humpty Ball and 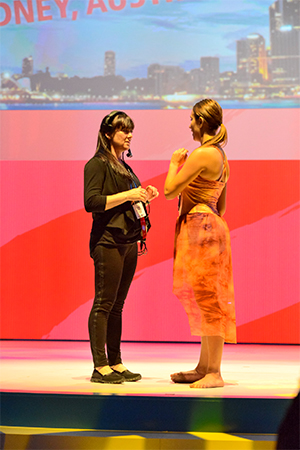 working with some big names/performers is the best!
Some people can be very diva-like, but at the end of the day they will turn to you for help, so by showing them you are all business with a few laughs thrown in to put performers at ease, sets you in good stead from the get go.

One particular event I was dealing with a well known singer, and during her introduction to bring her onstage the MC wasn’t supposed to mention her name – it was meant to be a big reveal – but the MC accidentally told the crowd who it was. Her manager had a total melt down backstage and there was dead silence! Awkward!

After a minute, which felt like a lifetime she went onstage as the manager was still going on about it so I had to pull him away and tell him to ‘get over it’! The singer wasn’t impressed about it but she powered through like a pro and had a great show. She came off stage upset with her manager for carrying on – it felt like a reality show was playing out in front of me! Never a dull moment…

A: It can be a real challenge when there’s no rehearsal time, or when some people take up too much rehearsal time because they are running late. I’m a stickler for being on time!

Q: What do you do to overcome any challenges?

A: This is a tricky one. You basically have to fly by the seat of your pants and be on point for anything that can happen. 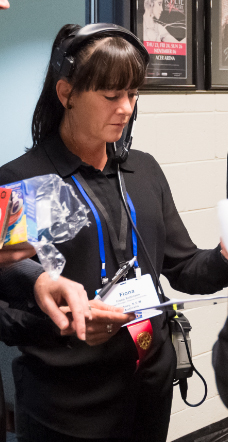 There are no real solutions but one thing I have in the back of my mind is, the audience doesn’t have the run sheet in front of them so if something does go wrong or someone stuffs up, the audience has no idea, so just run with it.
It’s a challenge working with those who don’t listen to briefings because “they’ve done it a million times” and then they walk out on stage and they have the old, deer-caught-in-headlights look!

Q: Is the events industry a supportive environment for women?

A: There are certainly more women in the audio visual side of the business these days. With more women around we tend to lift each other up and support each other when it’s needed. When things get hectic, sometimes you just need a debrief, or glass of bubbles so it’s great to have a supportive team around who understand the perfect time for each of these!
Plus with women’s networking associations like Business Chicks, who Staging Connections sponsors, I’ve been able to get involved and I love what they’re all about. They also have really empowering speakers at their events which are produced by an all-female team YAY! Associations like these have certainly lifted the profile of women in many industries, including the AV side of the events industry.

A: Learn the art of patience! You will also need to be quite forceful and firm to get things moving or it will all fall to pieces.
Be prepared, ensuring people are ready to go on stage way ahead of time. There is nothing worse than having a speaker or performer who is late to the stage, it reflects badly and could have been avoided with a little more preparation time.
Also learn where the green rooms are and make sure that they’re set to their riders/requests.
Oh and the big one…..always check as to when do I/we get fed, this is very important to know! 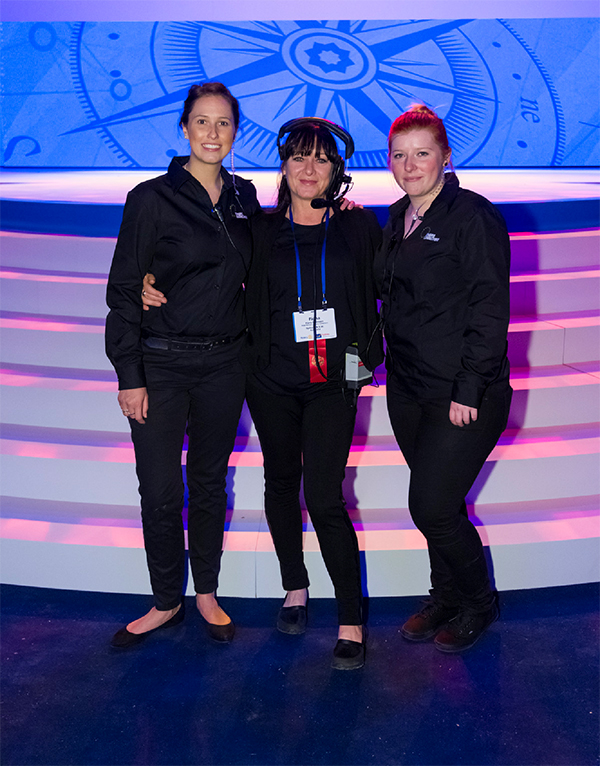 Q: When you’re not busy behind the scenes, what do you get up to?

A: Doing a Marathon…Not running of course, a TV Marathon, of any new series I can get my hands on. I can’t get enough once I’m hooked. I can have 3 different shows on the go at any time.