Bringing you the sounds of the Santos Tour Down Under 2016

For the 18th consecutive year, Encore Event Technologies (formerly Staging Connections) provided audio and visual services for the Santos Tour Down Under; an action-packed nine day outdoor event featuring world-class cycling; and combined with styled gala dinners and street parties. Casts of thousands make the pilgrimage every year to revel in the atmosphere the Adelaide event brings. It’s a fantastic Australian event to be part of and Encore are proud to provide all the audio visual equipment for yet another successful year.

Encore’s Adelaide events team were briefed to provide and operate crystal-clear sound and vision equipment for all start and finish lines. This included prodding all the AV for the public address systems, commentary locations, and presentation stages. In addition, our AV technicians were charged with providing localised vision mixing for sponsorship recognition sent directly to multiple LED screens and TVs in the corporate areas lining the various circuits and routes. 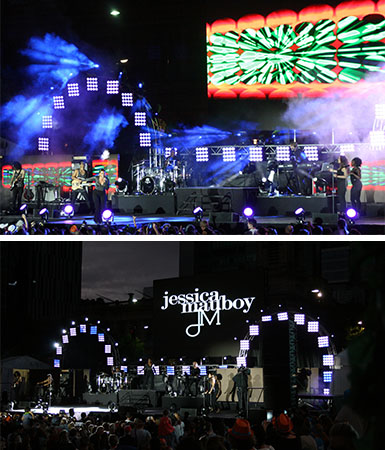 As part of the social events running alongside the main cycling race, audio and vision support was required for the team presentations, tour parade cars, as well as the opening night music concert by Jessica Mauboy and week long Tour Village in Victoria Square. As this is one of the biggest sporting events on the Australian calendar it receives huge media attention. It was our job to ensure the media conference rooms at the Hilton Adelaide had all the audio and vision equipment necessary to broadcast. Plus, Encore were called on to supply multiple outdoor LED screens to bring spectators all the action live from the race.

With a host of world-class technology at their fingertips, Encore installed a vast amount of audio, lighting, and vision equipment to ensure all aspects of the racing festival was captured. This included lighting for the opening night concert featuring popstar Jessica Mauboy as well as numerous LED screens – both small standalone screens and truck mounted screens –  strategically positioned around the outdoor event to provide the live broadcast of the race, highlights, event sponsor recognition, a Twitter wall in the Village, television commercials and also as a stunning backdrop for the presentation stages at each race finish.

To enhance the Adelaide event’s branding, the Encore events team designed a variety of animated holding slides and sponsor reels to support the official broadcast.

Going the extra mile as part of our audio visual solution

As a long term supplier and sponsor, Encore believes in the power of this event to draw thousands of tourists and business event delegates to Adelaide every year. In 2016, Encore supported Wednesday’s Stage 2 race as the naming sponsor for the leg from Unley to Stirling. The event ties into the beliefs of the Encore team, promoting cycling and professional athletes performing at their best whilst showcasing the sights, food and produce of South Australia.

For Stage 2, the finish line at Stirling reached 35 degrees with 60% humidity, so the creative Encore team sourced over 3,000 Zooper Doopers and distributed them to the sweltering crowds!

A custom made trophy was designed using a Horn Speaker from previous year’s events that was plated in aluminium and covered in custom decals and a naming plaque – its creativity and striking uniqueness certainly stood out at the presentation! 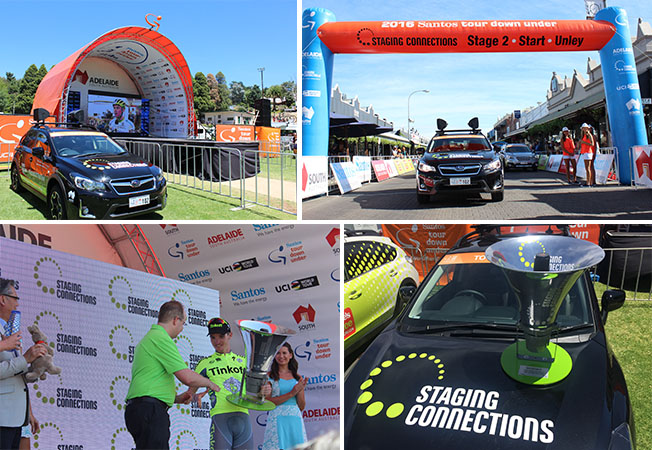 For the Subaru Tour Parade, Encore revved up the crowd lining the race route 30 minutes prior to the peloton. They played the Tour Down Under theme song and various cycling sound effects building excitement with the energetic crowds that eagerly awaited the racing action.

At each finish point, the team worked with the Presentation Event Manager, Big Fish Events to mix and broadcast “Breakaway TV” to the fans via large LED screens and street-lined PA system. The system pulled live footage from the host broadcaster and from custom television commercials for sponsors, as well as highlights and expert commentary from two dedicated commentators at each finish line. This ensured that the fans were well informed with live race updates as well as extensive sponsor recognition.

What did the client say about the event and AV production services?

“As a long term supplier of the Santos Tour Down Under we were thrilled to have Encore (then Staging Connections) solidify this relationship in 2016 by becoming the Stage 2 naming rights sponsor.

“The 2016 event was one of the best yet and a highlight of this year was the opening concert featuring Jessica Mauboy. The stage set and graphics really set this event apart and what was most impressive was the change of the stage from a presentation to concert in under 5 minutes to ensure the crowd remains and is engaged.  The concert is a great example of the service provided by Encore {sik Staging Connections} and why we are excited to continue to work with them both as a supplier and sponsor in coming years.”

Our local events team is based across eight key venues and is headed up by General Manager, Brien Keys. The team are 100% Adelaide-proud and their passion for the outdoors makes them key suppliers to some of the city’s main summer events, including the Adelaide Christmas Pageant, Clipsal 500 and year on year sponsorship and AV for the Adelaide Crows. If you’re looking to host your next corporate event in Adelaide, than we’re the experienced events team you can rely on. We proudly offer Australia’s largest range of event services across audio, lighting, staging, vision and extending to styling, multimedia and digital event solutions like webcasting, live polling and event social media. Get in touch with us today or call 1800 209 099 to speak with one of our event experts.